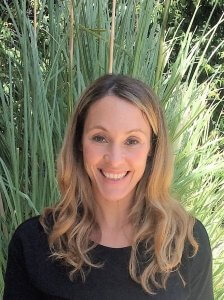 Physical Therapist Kristin Jarrett was born and raised in a town just outside of New Orleans called Chalmette, Louisiana. She went to school PT school the University of Florida and obtained her Masters of Physical Therapy in 2005, returning home to Louisiana around the time of Hurricane Katrina. Kristen then moved to New York City, where she worked full time with the cast and crew of Disney’s The Lion King on Broadway and several other shows during her four-year stay. During that time, she honed her manual therapy skills at The Institute of Physical Art.  She also worked in the renowned Memorial Sloan Kettering Cancer Center.

Kristin next returned home to Louisiana, this time to Baton Rouge.  She worked in several settings and gained certification in Functional Dry Needling through Kinetacore in 2012 — a technique that targets tissues that produce pain and contain trigger points using a small-thin needle that is inserted through the skin into areas of the muscle. She also obtained her certification in Instrument Assisted Soft Tissue Manipulation (IASTM) using Hawk Grip’s tools in 2015. Kristin then moved to Austin with her husband and continued work as a Physical Therapist.

Kristin joined Austin Preferred Integrative Medicine in early 2017. Outpatient work has always been her calling due to her enjoyment using her manual skills, making a lasting impression with patients and incorporating her love of fitness all in one place.

Outside of work, Kristin enjoys all things outdoors. She is a wife as well as a mother of two children and two dogs. She continues to dance and loves any opportunity to work with Performing Arts patients. Her next goal is to obtain Pilates certification to take her rehab and love for Pilates to the next level.

Learn why we are among the leaders in Integrative Medicine in Austin.

Call (512) 442-2727 with questions about the services we offer, or to schedule an appointment at our South Austin clinic.
Contact Us